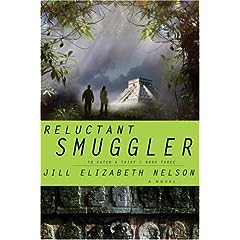 When Desiree Jacobs “steals” a priceless Mayan mask from Museo de Arte Mejicana, little did she realize the problems it would cause. First, the “theft” was to test the museum's security system. Second, well, I'll let you read about that. Third, the arch-rivals, the Greybechs, a competing security agency that stoops to all lows in order to gain clients, or rather make sure the HJ Securities loses clients.

Desiree has a surprise for them, but isn't ready for the surprise that Presidente Montoya, Chairman Vidal, Vice Presidente Corona and others have in store for her. Nor does she feel equipped to deal with the near fatal accident of her FBI fiancee Tony Lucano.

I was hesitant to pick this one up, mostly because of other commitments, but the title fascinated me. I decided to go for it, and for the most part I'm glad. Jill Elizabeth Nelson writes a non-stop, full-throttle action/mystery. She manages to have things going wrong on two fronts, which makes it even more overwhelming, but engaging. If you're looking for a mystery, not a cozy, but something with thrills and action to it, RELUCTANT SMUGGLER is just the thing for you.

Sold with the big boys at Amazon Books

As well as Waterbrook Press

And last, but by no means least
Barnes and Noble

Thanks so much for featuring Reluctant Smuggler on your blog. I had loads of fun writing this book. I only hope my readers get as much enjoyment!

Having fun writing the book showed. I usually tell people that if you enjoy what you're writing, then people will enjoy reading it. I'm right of course. ;-) I did have fun reading your book. I loved the way you threw stuff at her from all sides, pulled the case into 2 countries and had a battle on several fronts going. I loved that it was NOT a cozy mystery. Thank you for that.