Time for Another Tour

It's that time of the week! Time to do a blog tour! This week's tour is Violette Between.

Between Here and the PAST,

THERE LIES A PLACE...

Alison Strobel graduated with a degree in elementary education, and in the summer of 2000 she moved from Chicago to southern California where she taught elementary school for three years. It was in Orange County that she met her husband, Daniel Morrow, and the story developed for her first novel, Worlds Collide.

Violette Between is a poinant story of a true artist. When the love of Violette's life, Saul suddenly died, she died too. Then she meets Christian, who also is morning the loss of a loved one.

As Violette and Christian begin to feel something that they both thought was impossible. Tragedy strikes again. Christian finds Violette on the floor of his waiting room, that she had been painting to look like a New York rooftop restaurant.

As Christian holds a vigil at her bedside, begging her to come back to him, Violette is in a coma, traveling to a place where she meets her beloved Saul. And she finds that she may not want to come back!

What would it be like to choose a place between the past and the present? 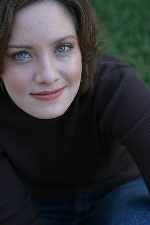 Violette Between is a powerful character study of a woman finally relinquishing the past to move on, only to be thrust into the quandry of reliving that life and needing to make a choice.

For Christians, this will definitely make you think about heaven and the consequences of eternal life.

I apologize to all for the way this came out. I'm not an HTML programmer and tried to follow Bonnie's instructions. This is what I came out with. If I used HER HTML I didn't get the photos of the book or the author. I trust you will read through the post anyway and then find this book and read it.