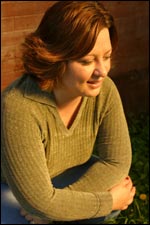 Tricia Goyer is one the members of the Christian Fiction Blog Alliance (Tricia's Blog, "It's Real Life" Tricia's Parenting Blog, "Generation NeXt") and we are pleased to be able to review her exciting historical fiction book, Arms of Deliverance. She was named Mount Hermon Christian Writers Conference "Writer of the Year" in 2003. Tricia was also a finalist for the Gold Medallion Book Award and won ACFW's "Book of the Year" for Long Historial Romance in 2005 AND in 2006. She has written hundreds of articles, Bible Study notes, and both fiction (three other WWII novels, From Dust to Ashes, Night Song and Dawn of a Thousand Nights. Night Song, the second title in Tricia’s World War II series, won ACFW's Book of the Year for Best Long Historical Romance.) She's and non-fiction books. married to John, and they have three great kids whom she homeschools: Cory (17), Leslie (14), and Nathan (12). They make their home in Northwest Montana with their dog, Lilly. 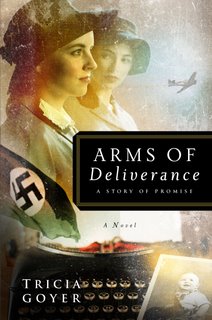 The fourth and final novel in this exhilarating series capturing the tales of men and women swept into World War II.

Katrine, a Czech Jew, is so successful in her attempt to pass as an Aryan that she finds herself dating a Nazi officer. Having convinced him of her genetic purity, the officer sends her to stay at a Lebensborn home--a Nazi breeding program in which children are raised and indoctrinated by the state.

Meanwhile, two friends, Mary and Lee, one a socialite, the other a working class girl, land similar reporting jobs at the New York Tribune on the eve of the war’s outbreak. Now rivals with assignments on the frontlines of war-torn Europe, Lee joins troops sailing for Normandy, while Mary's destiny lies in the cramped quarters of a B-17 bearing down on Berlin. Before the presses roll, their lives will be indelibly marked by a caring American navigator, brave French resistors, and a maniacal Nazi officer. Arms of Deliverance is a story of unexpected redemption.

Read Chapter One on Tricia's Blog.