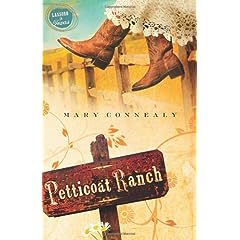 Now to my favorite. Comedy. Not something you'd expect of a mystery writer maybe, but I love comedy and PETTICOAT RANCH has it to overflowing. There's been some good writing and some good comical moments in some of the other writings I've read for CFRB so far, but Mary had me belly-laughing. That's not something I normally do, even when it's good. But I just couldn't help myself.

One of the comic tacks that is taken here is Sophie's actions where they meet her emotions, and later where they meet Clay's brusque mannerisms. It's comedy that takes birth from pain, sorrow, anger, frustration and pride. Sophie acts and reacts in such a normal and believable manner because of this added layer.

Clay is a bit like Sophie, proving that opposites repel, not attract one another. Yet God wants them to be attracted to one another and the road getting there clearly goes against the grain for him. Here's a case in point (don't kill me for this Mary); once Clay is up and about after his brush with death at the beginning of the book he takes stock of the situation Sophie is in. He goes into town to buy some much needed supplies. Yet before he leaves he asks Sophie if she understands what needs to be done. She replies that she does. Then, almost as a last minute thought he asks her if she's a “God-fearin' woman”. She says she is, wondering what these questions mean. Well, Clay bought supplies alright. They included the preacher and announces they need to get married right away. She goes ballistic. The nerve of him, deciding to force himself into her life. The least he could have done was ask. Seems in his mind those 2 small questions he asked before leaving were what he considered his proposal. The really funny thing is Sophie actually goes through with it and the fun really begins.

When we look at Sophie and Clay we see ourselves and can't help but laugh. A while back some guy wrote a book call MEN ARE FROM MARS, WOMEN ARE FROM VENUS. I've never read the book and I'm not necessarily endorsing in here, but the idea of 2 people, men and women, who talk, think and act so vastly different from one another is just about on the mark. I've thought to myself, as I watched my wife fluttering around the house, “If she wants me to help she'll ask.” I usually go back to my book or my DVD or whatever. The trouble is she's thinking, “What's wrong with him? Can't he see I'm swamped and need some help here?” Both expect the other to know what they're thinking and neither one does. It creates some problems, but in the long haul we can look back and say, “There goes Sophie and Clay, at it again.