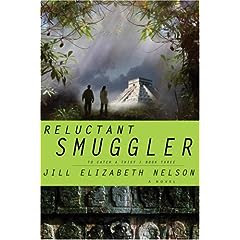 When Desiree Jacobs “steals” a priceless Mayan mask from Museo de Arte Mejicana, little did she realize the problems it would cause. First, the “theft” was to test the museum's security system. Second, well, I'll let you read about that. Third, the arch-rivals, the Greybechs, a competing security agency that stoops to all lows in order to gain clients, or rather make sure the HJ Securities loses clients.

Desiree has a surprise for them, but isn't ready for the surprise that Presidente Montoya, Chairman Vidal, Vice Presidente Corona and others have in store for her. Nor does she feel equipped to deal with the near fatal accident of her FBI fiancee Tony Lucano.

I was hesitant to pick this one up, mostly because of other commitments, but the title fascinated me. I decided to go for it, and for the most part I'm glad. Jill Elizabeth Nelson writes a non-stop, full-throttle action/mystery. She manages to have things going wrong on two fronts, which makes it even more overwhelming, but engaging. If you're looking for a mystery, not a cozy, but something with thrills and action to it, RELUCTANT SMUGGLER is just the thing for you.

Sold with the big boys at Amazon Books

As well as Waterbrook Press

And last, but by no means least
Barnes and Noble

CFRB Tours NOR IRON BARS A CAGE, by Caprice Hokstad

In place of a regular post for NOR IRON BARS A CAGE, by Caprice Hokstad, I decided to put up her trailer. This will give me more time to work on the posts for her book on the Christian Fiction Review Blog, which you'll be able to read the first full week of February.

Read more, even sample chapters at Welcome to Latoph

You can find out more and purchase the book at Amazon
Posted by David at 11:56 PM No comments:

TIME MASTERS, BOOK ONE: THE CALL, by Geralyn Beauchamp is one of the finest pieces of writing I've ever had a chance to read. She wrote this masterpiece for herself, if you can believe that. She did it just to prove that she could write. If you've read some of the other posts you'll realize that it was originally 750 pages. She managed to trim it down to 566. The thing that really irks me is she set it in her desk where no one could read it. It sat there for ten years. Can you believe it? Can you believe someone with talent like this writing a masterpiece and putting it in a desk? That's what she did though. Thank God some of her friends practically forced her to try to get it published.

Now I'm not asking you to get down on Geralyn because of this, but to show you how much she actually identifies with both of her heroes. In one sense she's Dallan MacDonald, a Scottish Highlander who must learn to accept the truth of many things that seem impossible to become the next Time Master. Wretched from his homeland in Glencoe, Scotland in 1692 he finds himself training. Now he doesn't know it, but when we get back to him it's the year 3698 and he's been there for 10 years training to be the next Time Master, something he utterly refuses to believe...until he sees her.

"Her" is Shona, the Muiraran Maiden who was stolen as a child, and hidden in another time. Dallan and the rest of us catch up with her in 1995. The problem is she doesn't know she's Muiraran. She notices some strange things about herself, especially of late, but she thinks she's a regular human. Now Dallan must join with her, but she must do so willingly, as must he, and she must accept who she really is.

If you've been paying attention you'll notice that both Dallan and Shona had some truths that they didn't believe, but had to come to grips with and accept. Geralyn is much like that. She wanted to see if she could write, not because she believed she was a writer, but to see if she could do it. So when she was finished she stuck the book in a drawer. But like Shona she needed to feed. The writer she always was had been released. Now she had to embrace who she really was. She couldn't deny who she was anymore than Dallan could deny he was a MacDonald. So you see, even the road she traveled to authorship tells us about the book she lovingly wrote. I hope you will all read it and enjoy the marvelous work it is.

Featured at her own site Welcome to Time Masters

You can find it at Barnes and Noble

As well as at Amazon

And of course at Cold Tree Press