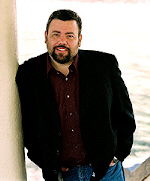 Robert's novel paints a scenario so frighteningly real that six Hollywood producers were bidding on movie rights before the novel was completed. His acclaimed debut novel, Comes A Horseman, is being made into a major motion picture by producer Mace Neufeld and his short story "Kill Zone" was featured in the anthology Thriller, edited by James Patterson.

Robert is an award-winning author of over a thousand published articles and short stories. He is currently a contributing editor for New Man magazine. His work has appeared in Reader's Digest, Travel & Leisure, Modern Bride, Consumers Digest, Chief Executive, and The Arizona Daily Star, among other publications. In addition, he previously worked as a celebrity journalist, interviewing Stephen King, Tom Clancy, Charlton Heston, and others for magazines such as Rocky Road, Preview, and L.A. Weekly. He has sold or optioned three screenplays.

Robert is an avid scuba diver, swimmer, reader, traveler, and a law enforcement and military enthusiast. He lives in Colorado with his wife and four children.

He is currently working on his third novel.

If you breathe, it will find you... The list of 10,000 names was created for maximum devastation. On it are business leaders, housewives, politicians, celebrities, janitors, children. None know what is about to happen...but all will be part of the most frightening brand of warfare the world has ever known.

The GERM...a more advanced form of the Ebola virus...has been genetically engineered to infect only those people whose DNA matches the codes embedded within it. If your DNA is not a match, you simply catch a cold. But if your DNA is a match, within days your internal organs liquefy and you die a most painful death. There is no cure.

The release of the virus would usher in a new era of power...one in which countries are left without any form of defense, where one person or millions could be killed with 100% accuracy yet result in no collateral damage to property or those not targeted.

That time isn't coming...It is now!

GERM is coming. Pray the assassins get you first.