This week, the Christian Fiction Blog Alliance is introducing 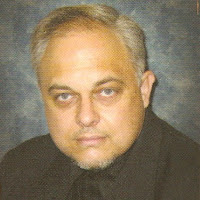 MARK ANDREW OLSEN whose novel The Assignment was a Christy Award finalist, also collaborated on bestsellers Hadassah (now the major motion picture: One Night With the King), The Hadassah Covenant, and Rescued. The son of missionaries to France, Mark is a graduate of Baylor University. He and his wife, Connie, live in Colorado Springs with their three children.

Just below the surface among the family of God lives another family tree--one traced in spirit, invisible and ageless, known as the Watchers. For two thousand years they've seen beyond the veil separating this world from the next, passing on their gift through a lineage mostly overlooked. Throughout history they've scouted the borders of the supernatural frontier, but now their survival hangs by a thread. And their fate lies in the hands of a young woman, her would-be killer, and a mystery they must solve....

"Congratulations. You just reached my own little corner of cyberspace.

Who are you? And why are you checking me out?

Drop me a few pixels, and let's find out!"

With that innocent invitation, Abby Sherman unwittingly steps in the crosshairs of history, and thus begins her harrowing tale--taking her from ocean-front Malibu to the streets of London, the jungles in West Africa, the Temple Mount, Jerusalem, and to the very gates of heaven itself!

A sneak preview of eternity becomes her one-way ticket to danger--and discovery….

Two lives collide in a globe-circling adventure involving both peril and discovery: Abby, a young woman whose visions of heaven turn her into a Web-celebrity; and Dylan, a troubled young man sent by an ancient foe to silence her. From California beachfronts to Nigerian rain forests to Jerusalem and back again, THE WATCHERS is high-octane blends of action, mystery, and spiritual battle spanning centuries.

A woman's awe-inspiring vision launches her on a quest through distant lands and ancient history, face-to-face with eternity and into the arms of a family line on the brink of annihilation...

A man who is hired to exterminate her discovers the folly of blind loyalty, then learns how to wage war in a realm he never believed had existed...

An extraordinary saga of the unseen war against evil, the reality of the supernatural, and the transforming power of forgiveness.

"A writer who can take your breath away with a single sentence. A welcome, fresh voice that must be read!"--Ted Dekker

I may not be the same caliber of writer as Ted Dekker, but I have to chime in. I set the bar very high when writing my reviews. So high that many good writers only get a 4 star rating. Mark Olsen's THE WATCHERS received my first 5 star rating. It was that unexpected work of greatness that I'd been looking for, something that would stand above all the others. Isn't that what a 5 star rating is supposed to be? Well, Mark sure earned it with THE WATCHERS. There are places where it is dark, but not gory. He breaks the darkness up with just enough humanity, humor and even romance, to keep the reader tuned in. What is it about? Well, suppose you stepped out of your house one morning and could actually SEE the spiritual battleground you were standing one? This is something that he has built into the story with such eloquence that one finds themselves looking over their shoulders. Do we really want to have “the Sight” and be “Watchers”, or do we want to warm a pew in some dead church someplace. The choice is ours, but the ramifications are beyond our comprehension. This Mark Olsen brings home to us in one of the most fascinating stories I've ever read in contemporary Christian fiction. You can tell that he writes from a heart that serves the Lord. To me that's the most important quality. For you see not just the words of a man, but the vision of our God.” - David Brollier; author of THE 3RD COVENANT
Posted by David at 8:25 PM