OFF THE RECORD
(Zondervan August 15, 2007)
by
Elizabeth White 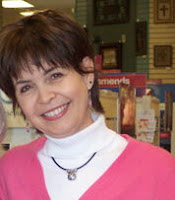 Beth White is the author of Fireworks and Fair Game, as well as the critically acclaimed Texas Gatekeepers serie from Love Inspired Suspense.

In her own words, she appreciate her most valued roles as wife and mom. Beth is also a second-grade Sunday school teacher, church orchestra member (She plays flute), and artist. She loves to read, crochet, sew, go on mission trips and avoid housework.

Beth lives in Mobile with her minister husband, and is currently on staff at First Baptist Church of North Mobile (fondly known as NoMo), in Saraland, Alabama.

Ambition is on a collision course with a secret from the past.

Judge Laurel Kincade, a rising political star, is announcing her candidacy for chief justice of the Alabama Supreme Court. Her aristocratic Old South family, led by her judge grandfather, beams as she takes the podium. Then her eyes light on a reporter in the crowd…and suddenly her past becomes a threat to her future.

Journalist Cole McGaughan, religion reporter for the New York Daily Journal, has received an intriguing call from an old friend. Private investigator Matt Hogan has come across a tip…that Laurel's impeccable reputation might be a facade. Matt suggests that Cole dig up the dirt on the lovely judge in order to snag his dream job as one of the Journal's elite political reporters.

There's just one problem: Cole's history is entangles with Laurel's and he must decide if the story that could make his career is worth the price he'd have to pay.

A sensational scoop becomes a rollercoaster ride of emotions. Can Laurel and Cole find forgiveness and turn their hidden past into a hopeful future...while keeping their feelings off the record?

Thanks for the post, David. While I'm here, you might want to scoot over to my website at www.elizabethwhite.net and enter my drawing for two baskets, each full of 10 new Zondervan releases. Welcome mat's out!

Thanks for the invite Beth, but there are a few "problems". I'm way too busy to read extra email, so I'd have to decline your newsletter. Also as co-founder of the Christian Fiction Review Blog (CFRB found at http://cfrblog.blogspot.com) I read a lot of works and have received TRUE LIGHT from Terri Blackstock when I reviewed her book for our tour. I also have read CORAL MOON, by Brandilyn Collins. You might want to scoot right over to the CFRB site (see website above) and see if it's something you and Zondervan would be interested in utilizing to help spread the word about your book. Personally, I haven't read it, although it sounds like a very intriguing book, right up my alley.