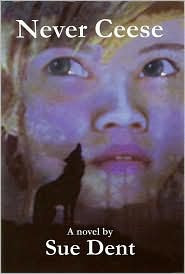 This week it is my joy and pleasure to tour NEVER CEESE, by Sue Dent. If you really want to learn more about this follow the links at the bottom of this page or go to the Christian Fiction Review Blog where her book is currently being toured.

Now before people start in on me let me just say that I'm not generally a horror fanatic, and trust me, Sue Dent taps into the horror genre with her vampires and werewolves. I do, however, find that horror can help put a realistic slant on my own work. When I balance that out with my own personal sense of humor things go quite well.

This story is about the cursed. Ceese, a werewolf hoping against hope that there is some way to free herself of this curse, an Richard, a vampire who has long ago lost hope, are our two major characters. To be frank, I've never had vampires or werewolves as protagonists before. Sue wants us to see something, that the cursed are victims as much as they are predators.

The sinful nature of man is our curse. Interestingly women, who are considered, generally, conniving and deceitful, are here represented by Ceese, a werewolf. As such she is a shape-shifter as well as a predator. Whether Sue is trying to make a gender point here or not, it's made. Men, who are basically more blunt, and sometimes rather stupid, are portrayed by Richard, the vampire who must live off the blood of others (which he does through medical supply...which I found interesting). Instead of taking the dominant role in the home man is often out doing his own thing. The result is a fractured household. The curse is real. That's what I'm saying. Okay you can forget your silver bullets and garlic, but the curse is very real. Who loses hope first, generally speaking? the man or the woman? The man, almost always. Why is that? Because he is generally buffeted by the knowledge of his sin. The woman, while facing the same weight generally can turn to the Lord before the man for comfort and reassurance. So it is that Richard is one who lives without hope.

I could go on and on, and you can read more of my posts on the Christian Fiction Review Blog, but I wanted to make sure my personal blog had something up. If you've never considered Christian horror, especially with vampires and werewolves in it, now is a great time to get a real passion for it. And just to be more of a blessing, Sue's 2nd book, FOREVER RICHARD will be coming out in the Fall. Great works by a great Christian writer and a great person.

You can also visit the following links of participating CFRB sites:

Back to the Mountains