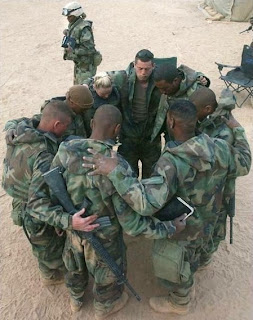 On December 7th, 1941, sixty seven years ago, the attack on Pearl Harbor was devastating. The Japanese had hoped to bring us to our knees, and so they did, in prayer and action. In months we had a fleet that arose out of the ashes of that attack that went on to defeat them in the Pacific. We were not brought low, but realized how lazy we had become and arose to meet the enemy with a determination even the Japanese could not understand. In Europe it was the same. We had watched silently as allied nations teetered and fell under the weight of Adolf Hitler's crushing invasions, but when we entered the war we brought with us something he did not expect. We brought with us the heart of a nation determined to silence the weeping of our allies and still the hand that harmed them. We brought with us a weapon they did not expect, for we brought God with us.

On September 1st, 2001, only seven short years ago, terrorists took over planes and smashed them and all aboard, into the Twin Trade Towers and the Pentagon. Another plane, seemingly headed for a target in Washington, was brought down by the passengers who knew their fate before they rushed these terrorists. Christians witnessed to office workers as the towers billowed with smoke and others jumped out of windows to escape the flames. Every sort of emergency worker pitched in to help find those left in the rubble, hopefully alive. Some of them have died from the smoke they inhaled, others from sheer terror, but most remain, living with the horrors they witnessed. That day, as on December 7th, 1941, America wept.

There is a slight difference between these two events. In the former the people got behind the military and stayed there, if they couldn't join themselves. They resolved to conclude this war on behalf of fellow Americans they had never met. Today, society seems to have forgotten the attacks on the United States. Instead of getting behind the military, who staunchly persevere in unbelievably hostile environments and conditions, we seem to have gotten lazy once again. We want them to come home, not realizing that to do so would bring the war home with them. The newly elected president has said he will remove our presence from Iraq and move them into Afghanistan, which is no more friendly than where they are now, nor less hazardous. Now look at the picture above. They are remembering us, willing to take a stand in whatever land our nation sends them that we might enjoy the continued freedoms of this democracy. They bow their heads before the Almighty God and ask for the strength to keep us, and if possible, them safe. And largely we have forgotten them. We have forgotten to bow our heads before our Creator for their protection, for their safety, and for thanks that these brave men and women have chosen to stand in "harm's way" for us. May we be humbled before the Lord God and repent. May we turn back to Him and away from ourselves. For in doing so we shall find the courage to continue to do right, the power to stand against evil and the pride in being the people God has chosen us to be.

Perhaps we need to be reminded of the words of Abraham Lincoln as he summed up what is known now as the Gettysburg Address. He had come to be part of the dedication of a national cemetery for the fallen at Gettysburg, PA. Yet instead of dedicating the field he offered these words, words which we would do well to remember today,

"But, in a larger sense, we can not dedicate -- we can not consecrate -- we can not hallow -- this ground. The brave men, living and dead, who struggled here, have consecrated it, far above our poor power to add or detract. The world will little note, nor long remember what we say here, but it can never forget what they did here. It is for us the living, rather, to be dedicated here to the unfinished work which they who fought here have thus far so nobly advanced. It is rather for us to be here dedicated to the great task remaining before us -- that from these honored dead we take increased devotion to that cause for which they gave the last full measure of devotion -- that we here highly resolve that these dead shall not have died in vain -- that this nation, under God, shall have a new birth of freedom -- and that government of the people, by the people, for the people, shall not perish from the earth."
Posted by David at 8:00 PM