There once was a young girl who chased a rabbit down a rabbit hole and found herself in a.... Wait, that’s the wrong girl. Oh yeah! This young girl went to hide in a wardrobe while playing hide and seek.... No, that’s not the right girl either. Well, it is about a young girl. I’m sure of that. Her name is Cara Marshall, and, oh yeah, she finds this beautiful necklace with a seagull-like bird pendant. When she puts it on, like Alice and Lucy, she finds herself in an entirely different world. This week CFRB is proud to tour SEABIRD, by Sherry Thompson. It’s a smash hit.

On the cover it says, “Fans of C.S. Lewis will love this book.” Well I am a C.S. Lewis fan and I did love the book, but I found that there were more parallels to J.R.R. Tolkien than C.S. Lewis. Of course that’s just my opinion, but what is a review if not one’s personal opinion about a particular work? Unlike the Chronicles of Narnia, SEABIRD has the grit and realistic dangers more associated with The Lord of the Rings.

We actually don’t meet Cara until the second chapter. In the first chapter we get some history, 100 year old history upon which the entire novel rests. Cara enters the story more like Alice who wants nothing more than to go home rather than Lucy who is thrilled to be in Narnia. I haven’t memorized all the places, but Cara ends up in a wooded area among a people called the Young Ones. She is understandably disturbed, having been “world-napped” from Earth into this new world, regardless of how beautiful things first look. She doesn’t want to cooperate with them and only wishes to go home.

We all make choices, and some of them actually seem right, when they are so very, very wrong. Sherry Thompson does an excellent job of portraying such a situation through Cara. I think she must have thought, “How would I feel if I were suddenly yanked into some parallel universe and asked to be their hero?” Answering that question she fashions Cara into a most believable character. She’s upset, displaced, lonely and just wants to go home and have all these other people leave her alone. Isn’t this how most of us would react?

Okay, for those who think I’m going to go through the entire book and give you a breakdown of it all, you’re sadly mistaken. All I’m doing here is giving you a taste of the key character in the beginning of this work. The rest you’re going to have to read for yourself. After all, why should I spoil it for you?

Throughout the Bible there have been those God has called upon to lead His people, and a lot of the times they did not view this as a special honor. Moses argued with God about leading the children of Israel. Gideon was hiding out in a cave when an angel of the Lord hailed him as a mighty warrior of the Lord. He kept asking God for signs to prove that this was what God wanted. Amos, one of the minor prophets, states in the book of prophecy named after him that he was a shepherd and not a prophet. Being called out by God means being called into a place of service, never into a place of comfort. I think this is captured in the character of Cara. Just as each of these people wrestled with their calling and finally accepted it, we also find Cara maturing in ways that amaze even her.

This is not a straight forward parable, not something where you can say, this thing stands for this, and that stands for that, but rather is an epic tale of good verses evil. We are introduced to a trinity of evil doers and Alphesis, apparently the Narentan God who, fights for the good. He is depicted, when seen, as a Seabird, but this is only a form He seems to take on. Yet the symbol of the Seabird has become the symbol of good, of righteousness and of Alphesis himself. Within this epic keep your eyes open for the occasional hidden Biblical parallel. I’m not altogether sure she knows herself of all the Bible she tucked away within its pages. It is for that reason, if for none other, that you should pick this book up and do some Biblical treasure hunting as you enjoy the story.

I didn’t find a single typo in the entire work, although Sherry insists there are eight. Gee I wish my book had as few mistakes as eight. For die hard fantasy fans, this is a must read book.

Those posting reviews are listed below, although in no special order. Plus, there are other team members who will be posting just the basics, which I'm sure you'll find intriguing as well. So hunt around and enjoy the journey. Like Cara you may not think you are special or anything, but you really are. You may find yourself on one of these sites. 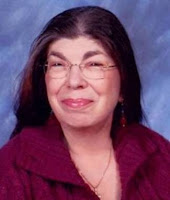 Now a little about Sherry Thompson:

I was born in Baltimore MD in 1946. Between then and my fifth year, my family moved to New-Port-News VA, Homeville PA and finally to Marshallton, Wilmington DE. I've lived somewhere in New Castle County DE ever since.

During the last three years of my time as an undergraduate, I also worked about 20 hours a week at the University of Delaware Library. I was accepted into the university's psychology graduate program, but chose to accept a fulltime position at the UD library instead.

I worked at the library from the spring of 1965 to the spring of 2000, when I retired from my position as Supervisor of the Interlibrary Loan unit within Access Services. Now, I write. And, revise, and volunteer, and … oh, yes, I write.


Now for further information and where to buy this wonderful book you can go to the source itself,

You can visit Books a Million

and of course Amazon
Posted by David at 1:00 AM

SherryT said...
This comment has been removed by the author.
10:49 AM

Thank you! I am now officially flattered and embarrassed.

By the way, when it comes to seeing all of the Biblical parallels, boy, have you got that right! I wrote the book from a Christian perspective but I never -tried- to insert a Bible lesson. When I was revising the book, I knew of several scenes in which "lessons" had slipped in when I wasn't aware.

Then along came my editor/publisher, Dave Wood of Gryphonwood Press. Dave is a Methodist minister who felt called to open his own publishing company. During the revision process, Dave would occasionally email me with something like, "So when so-and-so happens in chapter # whatever, you're making a parallel to Christ's teachings in Matthew..." etc.

Most of the time, I'd look again at the scene and just blink and mutter to myself, "Well, look at that, will you!" This kind of phenomenon happened so regularly that Dave even suggested creating a study guide for use with MYF (Methodist Youth Fellowship). I told him he would have to write it because it was obvious I would need to read it and learn from it. ;-P

I'm of the opinion that when you write for the Lord and put it in His hands, then His words flow out into our works. Probably one of the greatest examples of this is The Lord of the Rings, by J.R.R. Tolkien. I've created a Bible Study based on 30 characters or character groups from his epic story. There is so much more as well. I've spoken to young people and pointed out the death and resurrection types in The Lord of the Rings. I don't believe he set out to write these things, but just write a fantasy based on truth. In doing so he couldn't get away from Scripture. I think the same thing is true with you and a number of the writers we've reviewed at CFRB. As long as we let God do the leading He will be the central point of the story. (BTW, you should get ahold of THE DUKE'S HANDMAID and NOR IRON BARS A CAGE, by Caprice Hokstad. She does a magnificent job of providing Scriptural teaching when she's just trying to write a story.

What a tremendous review. I would add my encouragement to David's.

I have read a LOT of what we term secular fantasy and let me tell you, Seabird is right up there with Weis and Hickman, Brooks, and more.

The characters have depth and emotion, the plot is believable and vibrant and the backdrop is a new and inviting world that exudes charm and danger in equal doses.

Get a copy; read it. Not to knock Robert Conrad but: Go ahead - I dare you!

Sounds like a great book. I'll definitely check it out!

It is definitely a book you will NOT regret purchasing. That's because you won't want to read it just once, but again and again. I look forward for the other Tumult series with great anticipation.