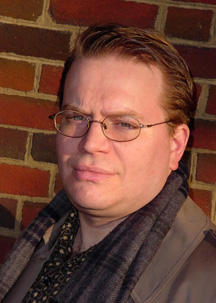 Chris Well is an acclaimed novelist and an award-winning magazine editor. His laugh-out-loud Christian thrillers include FORGIVING SOLOMON (one of Booklist's Top 10 Christian Novels of 2005), DELIVER US FROM EVELYN (#1 on Technorati, and a #2 Christian thriller on Amazon.com),and the semi-apocalyptic TRIBULATION HOUSE. By day, he is the Web Content Manager for Salem Publishing (CCM magazing, Youth Worker Journal, Preaching) and a contributing editor for CCM. He has also contributed to Thriller Readers Newsletter, 7ball magazine, Alfred Hitchcock's Mystery Magazine, and Infuse magazine. Chris and his wife make their home in Tennessee, where he is hard at work on his next novel. 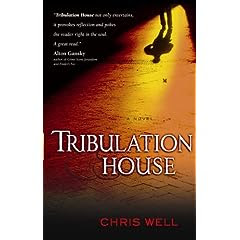 “I Might as well just tell you right now, I killed Reverend Daniel Glory."
The book actually starts that way. Then Mark Hogan, that's who is actually telling the story, begins to explain the events that led up to the actual act itself. He gets sidetracked and there's a lot more going on than just a murder. There's this whole Rapture thing where Rev. Glory has nailed down the exact time of this blessed event. People start falling into categories. There are those, like Mark, who believe the man implicitly, those who believe that as Christians we should be busy about the Lord's work, and those who don't believe in God or this event at all. This is a story of what happens when people follow the words of people instead of the Word of God.

My Favorite Pet Peeve
Chris addresses, in his satirical, humorist fashion, how foolish it is to follow the teaching of men than of God. I'm particularly concerned with Christians who have been told that they're going to be taken out of the world before tribulation hits. Ah, you want to prove that one to me? I mean, even if you really believe and hold to a pre-tribulation Rapture, isn't there a period when Christians are going to DIE for their faith? Paul taught us that in the last days we would heap teachers who would tickle our ears. Jesus said if those days were not shortened even the elect would fall away.
While Chris Well talks humorously about a serious topic he is very serious about the topic he's teaching about. Look also for the various side trips in the story as there are some great teachings hidden there as well. Chris is wonderful storyteller.

TRIBULATION HOUSE is not merely satire, it's solid Biblical teaching couched in both humor and suspense.

"In TRIBULATION HOUSE, Chris Well gives us something to laugh at, something to think about, and prods us on to being whoever Christ wishes us to be in the Body of Christ...even if it's just a Mr. Charlie. While initially not prepared such a serious topic to be treated with good doses of humor, I found it had more depth than many novels without humor."
David Brollier--THE 3RD COVENANT

I, too, enjoyed this story. Although it was a serious topic, I felt Chris depicted it in a humourous and refreshing manner. Having been in an apocolyptic-type religion as a child, I felt he made good points about the dangers of living our lives as if there are no tomorrow (like spending money we don't have, "knowing" we'll be raptured soon, not getting a higher education, etc.) This is a good read that I'd highly recommend to everyone!

What is the first commandment? Do you remember? "Thou shalt have no other gods before me." Pretty simple and plain. Yet as Christians we have made gods out of the way we worship, the gifts of the Spirit, the manifestations of the Spirit, people in authority who say things that we think are "cool", but possibly the biggest offenders are those who get Christians to focus on the end times instead of Jesus Christ. I'm fairly certain that if we focus on Jesus (and thereby keeping God as the ONLY God we worship) things will work out just as God has planned. However, if we focus on the numerous teachings about the end times, we'll get so caught up in it we won't be doing the will of the Lord, and we won't be ready when He returns. TRIBULATION HOUSE brought out that point very well. You might try reading FLASHPOINT, by Frank Creed and FAITH AWAKENED, by Grace Bridges. Both deal with the end times, but the emphasis is on service to the Lord.