Brandilyn Collins' is the bestselling author of Violet Dawn, Web Of Lies, Dead of Night, Stain of Guilt, Brink of Death, and Eyes of Elisha just to name a few.

Brandilyn and her family divide their time between the California Bay Area and Coeur d'Alene, Idaho.

She also maintains an informative blog called Forensics and Faith where she daily dispenses wisdom on writing, life, and the Christian book industry. 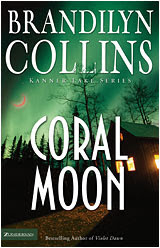 The figure remained still as stone. Leslie couldn't even detect a breath.

Spider fingers teased the back of her neck.

Leslie's feet rooted to the pavement. She dropped her gaze to the driveway, seeking...what? Spatters of blood? Footprints? She saw nothing. Honed through her recent coverage of crime scene evidence, the testimony as last month's trial, the reporter in Leslie spewed warnings: Notice everything, touch nothing...

VIOLET DAWN brought on a new dimension of Brandilyn Collins that I wasn't ready for. In fact, I was personally disappointed with the first book of her new series. It was going in too many places at the same time for me. Yet, CORAL MOON works precisely because she needed to get all that information out to the reader. Collins is not content to approach a story with your basic English style, that is to spend 3 or more chapters laying the groundwork and then actually getting to the story. She likes to dive right in (and take us with her in the process). That being the case, and her new series being more evolved or complex than some of her other series, it was necessary for her to run down all the rabbit tracks in the first book of the series. Now she's able to bear down. (I should say that once things started to come together in VIOLET DAWN it was a good read). CORAL MOON is more than just a good read. It's something that you'd expect from very few authors. Yup, she's got Kanner Lake jumping again with a string of murders that have police scratching their heads. You'll love the characters, the twists and turns, the blind alleys she takes you down...

And as Brandilyn would say...

Presently this Kanner Lake Series of books has its own character blog called Scenes and Beans . Stop by and visit the folks from Kanner Lake!